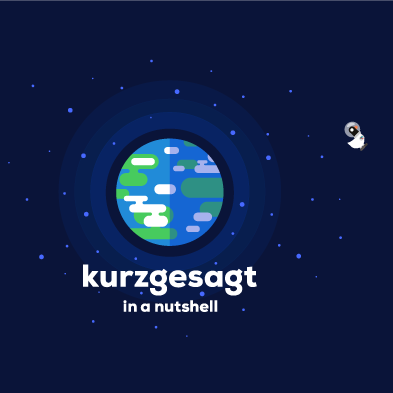 With over 8 million subscribers and past half a billion in views (as of March 2019), Kurzesagt – In a Nutshell is quite the success story on Youtube. Founded in 2013 in Berlin, Germany, its sudden and spectacular rise to being an internet sensation and the definitive source of bird animations covering science, space, current issues and existentialism is an inspiration for creators and animators worldwide. Kurzgesagt actually means “in a nutshell’ in German in case you’ve been wondering, and the videos are accurate, precise and beloved.

Kurzgesagt aren’t afraid to mention their numbers and they are quite impressive but true hero of the story lies hidden in plain sight. Though the data is not out on the subscribers to videos made ratios of popular educational Youtube channels, let me try my best to put this into perspective.

Judging from the numbers, Kurzgesagt has the clear edge over most Youtube channels let alone educational ones. This is not to cast shade on other creators, they are awesome and put in lots of hours and love in their videos. I love all these channels and that’s why Kurgesagt is an odd curiosity. I’ll be the first to acknowledge that I haven’t factored all the parameters*** but I’ll choose to ignore them for the sake of the argument. The undeniable reason for this result is their pious devotion to making quality videos by choosing quality over everything else.

The slogan on their Youtube channel is “One video a month. Quality > Quantity“. Having a team of full-time researchers, scriptwriters and animators would necessitate a business model that maximizes revenue just to keep the ship afloat. Kurzgesagt takes a U-turn on this approach and instead focusses on making the best videos with due diligence releasing only one every month. This is why we love Kurzgesagt and trust it. The restraint required to avoid churning out videos for the dollars is quite noble. Just when I thought they couldn’t get better, they released this video (partly why I wrote this blog post) just before deleting two videos with over 31 million views and huge economic opportunity because they don’t meet the standards they’ve set for themselves. Kudos. Worth the watch.

*98 videos were used for the calculations for the Subscribers/Videos for the Kurzgesagt due to the wild success of the Refugee Crisis and Addiction videos.

**MKBHD though not a educational youtuber is a highly successful and popular tech tuber on the platform. His use is for comparison purposes.

*** such parameters include Total Views, Total Views/ Videos and Total Views/ Subscribers and the age of the channels. These factored could affect the nature of the table.