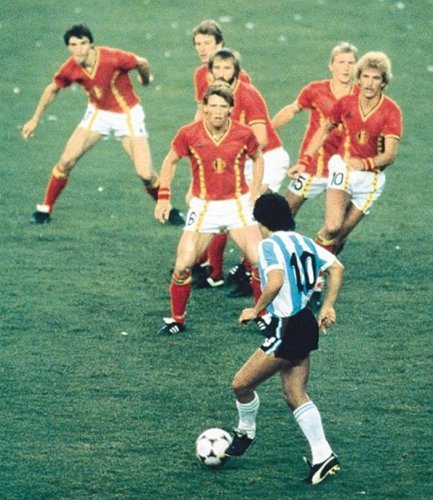 Weeks after his death I was still trying to figure out why Diego Maradona is arguably the best footballer EVER. Months have passed since the first draft of this post but I think I’ve drawn closer to somewhat of a reasonable conclusion. I reckon it lies with our fascination with the archetype of the tormented genius, a man burdened with immense gifts that everything in and around him crumbles at this weight.

To be honest, it’s in his death that his life was brought back to our collective consciousness. Other than frequent health scares, controversies, odd brushes with the tabloids and mistimed coaching spell rarely was the true genius of the man really appreciated. Not to say he was a forgotten icon but the posthumous renaming of the stadium in Naples was starkly long overdue, his cultural contribution to the city was frankly larger than life. There wasn’t a G.O.A.T discussion without mentioning his name, a mean feat for a man who hung his boots over three decades ago. But as the world mourned, his place as the best was finally immortalized.

There is something almost inhuman about the modern-day footballer or athlete for that matter. Tactics, statistics data-driven modelling, the strongly enforced nutritional restrictions, and tailormade public images. Listening to post-match interviews sounds is an unsettling mix of the footballing alternative to corporate jargon and a coached and rehearsed pr demeanour. It’s almost as if one has to strip and sacrifice everything fallible about being human in the pursuit of athletic excellence. There’s no greater contrast than with Maradona who after having reached the pinnacle of a footballing career early on in life not without great controversy, of course, went on to frankly derail the rest of his life in a crippling addiction to narcotics, debauchery, financial ruin and meddling with mobsters.

I would compare him to Van Gogh, the poster boy of the tortured genius, who is arguably one of the most revered figures in the history of Western art. Not just in the creative genius and expressive aesthetic whenever he had a ball at his feet but at the burden of having been bestowed upon the greatest of treasures from the gods. Talent that us mere mortals can only awe at. It’s hard to believe that one can have it all held together when that sheer rawness of talent. No one expected a conventional life from Maradona, in a perverse way, his failures are vindication for the mediocre. While Van Gogh literally took his own life at 37, Maradona at 60 had a cruel metaphorical twist. We all as humans as is our nature, maybe sadistically make merry of how those who’ve risen to the upper echelons are doomed to the same fate that befalls all the lowliest of beasts.

The human condition is nothing short of a tragicomedy. There are other countless tales that emphasize the tragedy of genii such as the schizophrenia of accomplished mathematician John Nash and the infirmity of Stephen Hawking, a man whose understanding of the universe was at the cosmic scale. Despite the fascination with the often cruel fate of genius, there are also countless counter-examples who lived ordinary enriching lives. And that is rather heart-warming.